I can't program the pico-8 very good but I keep trying.
I'm frequently in shock about what real programmers crank out of the pico-8

Plugging into that vibe I'm mentaly transported back to the late 80's and early 90's when i was fumbeling around using my MSX home computers. And trying to get the damn machines do what i wanted using MSX basic "code"

Currently if i'm playing a pico-8 games I'm playing them using a Xbox 360 gamepad. But it just doesn't feel right.
So i orderd some USB NES pads.

Then it came to me, on the MSX I played everyting using my (in the Netherlands famoust) "The Arcade 2" joysticks. 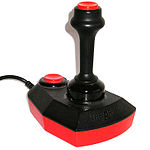 Look at that princess.

If Pico-8 would be a real (non virtual/fantasy) system what whould the default imput method be.

I like to see a new gun type in a further release, a little proton blaster would be nice, so i can blast a energy beam straight through a thin wall and mow a whol row of baddies...

Also a nice backpack woule be nice to :)