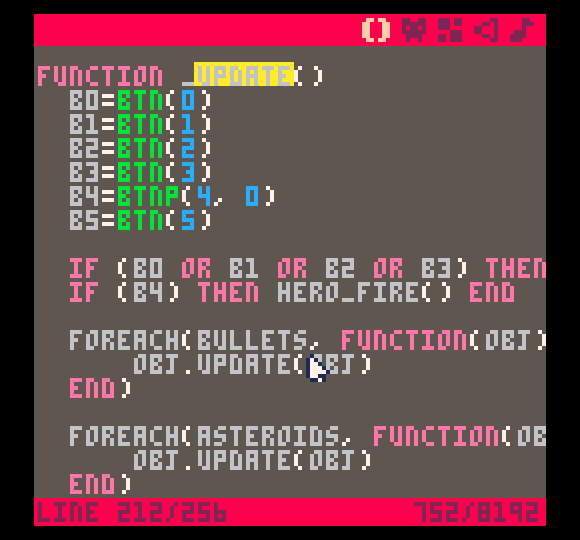 After reading more of the Pico-8 Zine 2 it's crazy obvious that I should use a "Finite State Machine" to control the hero ship, enemies, etc. I've been looking through the code of the iconic P.A.T. Shooter and it seems a state machine is used to keep track of everything.

It makes sense and it seems to allow for more "portable" functions. As in hey this function is great I can totally use it pretty much as is in a whole other project. Yay, me! Yay, us guys! (at least that's what I want to say)

The first thing to refactor, I guess, is the global variables declared at the top of the file. They can be blasted into the _init function and everything should work the same:

Notice the two new attributes state and pst. The state will hold a number designating what the current state of the hero is: 0=idle, 1=moving, 2=firing. The pst is for the player state time which will help track how long the player has been in the current state. It will be incremented in _update().

Okay I lied, the hero.state and hero.pst won't be directly updated in _update(), but in the move_hero and hero_fire functions. Following the guide add a change_state():

The functions takes an object p and a number/state s. The object's state and pst attributes are then updated. Thinking to use this same function for enemies as well.

Then edit move_hero adding this line at the top:

And the same in hero_fire:

Finally, to be more state machine like (I think) update the _update function:

I think things are now in a better state (haaa). Or at least some ground work has been laid to make it easier to manage multiple characters in the game at one time. Also, might help determine when/what things are happening around the screen.

New territory for me so I'm sure I'll be learning a lot the more I work with it.

how come the banner at the top of this page says "PICO-8 RULES"? Never seen that before!

@matt you can upload a pic for the banner in the forum settings.

I made the pic using the Pico-8 font. I think I found a ttf for the font somewhere on github. Maybe the Awesome Pico-8 repo.