Hey there. I'll be writing down a few things I'm discovering while taking a bite off the brand new Voxatron update. Scripting API was a long-awaited feature and I'm definitely excited to give a new spin to Vox.

I'm writing this post while playing with the alpha 0.3.5b. Stuff I'll be writing can and may change over versions.

As a script is a component like others, you can perfectly use them in an actor as well as an animation or an emitter. update and draw are called when an actor is updated or drawn.

A script has a basic encapsulation system. Local "top"[^1] variables are indeed locals to the script and globals are shared over scripts. Yeah, you read that perfectly. You can perfectly have "library" script pieces that are just there to hold your functions akin to a Pico8 code tab as long as the desired functions or variables are global.

Note that if the script has _draw and _update, they take precedence over Voxatron's routines, even if they're not placed in a room. I'm linking a cart that stores two script pieces, a few circle drawing routines and a script having _update and _draw. Feel free to download it to see how it goes. As you can see, the room is totally blank and isn't actually rendered at all. 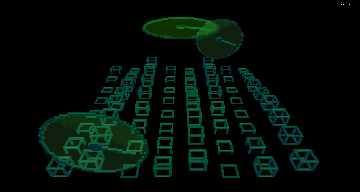 I don't know if there are "rules" for loading or executing or ordering the scripts pieces yet, but it looks quite promising. You can have behavior code for an actor, an advanced particle emitter to add tidbits to a creature or even take over voxatron's rules temporarily to implement some logic over it (for instance a battle engine to intrrupt your RPG players with some slimes? :D )

Colors are actually spaced over the [0-255] range sparsely. I'm linking a demo so you see them. Press up or down to change the bottom layer to see which colors are transparent. The 0-15 colors are the good old Pico-8 palette where the 16 and 32 color row looks like complementary colors. There are two nice gray gradients at 80-85 and 86-91. 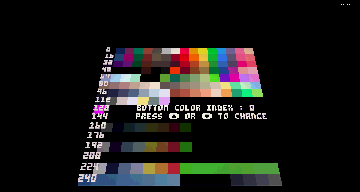 In 0.3.5 there is a scoping issue as seen there that raises when trying to use a local function through a function set to a variable.

For instance trying to make a globally accessible class named B where one of the class (or object)' members in a script like this:

will not properly find the local function new for unknown yet reasons. I suggest to create the global variable as-is and wrap the rest of the code in a do ... end block. It'll properly set the upvalues scoping and will fix the issue.

As there are a few quirks around how Voxatron loads code, there might be the need to make a few conventions to make easily shareable code.

[^1]: I can't find a better way or word to explain, but any kind of variable that's not already in a scope like a do/end, a function, a condition, a while loop or a repeat.

Thank you kindly for this! It's given me a idea that I'm going to post on.

Just spotted as I had just embarked on a similar journey. Thanks for this!

Two years after your initial post... How frigid are those Alpha waters...