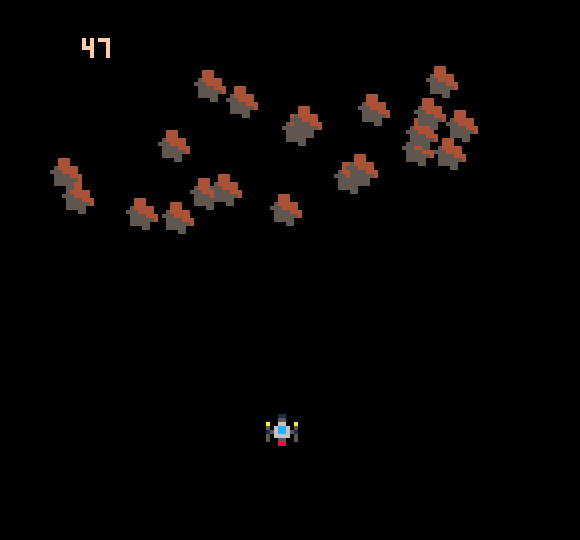 Adding asteroids to the mix seems like a good idea. They don't have bullets (hopefully) so they should be relatively easy to have float down the screen. Then again maybe they'll come into the the scene from any angle... haven't really decided on that part yet.

I think using the same type of object with an update method and an "array" of objects as we used with the bullets/lasers should work for asteroids too.

There will be differences though. First off we set the x coordinate to a random value from 0 - 127. Then a there's some statements to get a random direction for the asteroid left, right, or center. The value is applied to the object. The sprite and position are then set.

Now that we can create an astroid and have it blast down the screen in a southerly direction wee need to randomly send some 'roids through space.

After trying a few things out I came up with these relatively simple statements to be added to the _update function:

So if the ast_timer variable is divisible by 100 then a new asteroid is created and it's update function will meander it through the play area. Which reminds me, back up in the _init function create the ast_timer (asteroid timer) variable:

Great, now every so often a chunky asteroid will fly through.

Adding the remove asteroid if off the screen line makes me realize something similar for bullets is needed too.

In the update function (or is it now a method???) inside the bulletconstruct function add this line after the this.position.y* update line:

Things are progressing, but not quite as fast as I'd like. Mostly due to the day job taking up more development time than I'd like, but then again it's nice to make some money.

Another thing I've noticed while developing games is that the temptation to play the game I'm working on as well as other games is a lot hight than when I'm developing a web app, mobile app, etc. I guess it's kind of obvious, but I didn't really take it into account before setting off on this adventure.

I think the next thing to work on is making bullets/lasers actually hit something...