My family like the online word game Waffle but wanted to play more than once a day. So I wrote them this version in Pico-8. Along the way I reimagined it as an 8-bit console title with sound effects, music, particles, multiple levels, ramping difficulty, and a final “boss battle” that you unlock by completing all the preceding levels.

1.7: the in-game tutorial explains the blank spaces, now that the cursor does not skip over them

1.5: the game starts with the next unplayed level selected, so you can start playing with a single button
press.

1.3: bug fix in end of game condition (you must now complete all levels with score of 5); added a small animation on title screen when you beat a level with score of 5 to show that the cursor has been moved to the next level

1.2: particle effect on title screen when the player has unlocked the final level

Nice word puzzle game.
Had to fail couple times before I could grasp the rule.

Nice Waffle remake! It's too bad that Waffle added the archive right when you made this.

Yes. My timing was terrible!

But Waffle haven’t added particle effects yet, so I’m still ahead of the game there. :-)

I've published a new version with a small bugfix

The puzzles are all randomly generated, but I do like the way puzzle 23 turned out. 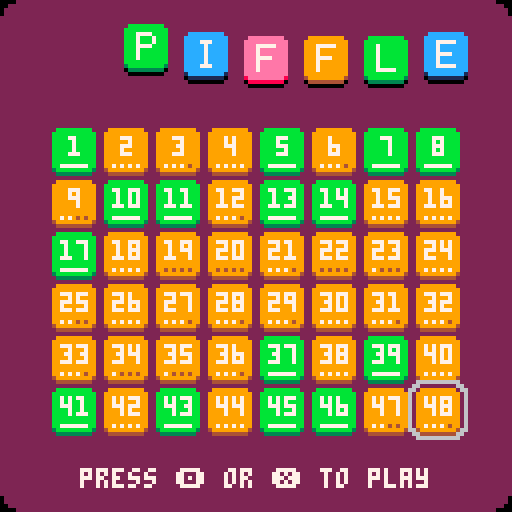 You’re not quite complete, though. The game will award you the title of Piffle Champion when you turn all the tiles green.