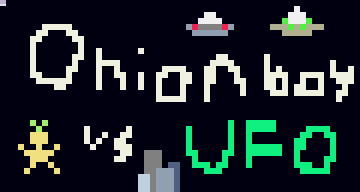 In this game you play as Onion Boy, a little man with an onion head. He flies a plane over the city when alien saucers appear and start attacking. Can you defeat the alien ships with your bombs?

You can also just destroy the city if you'd prefer to do that. Hopefully the mayor doesn't mind the collateral damage since you're defending the earth from aliens.