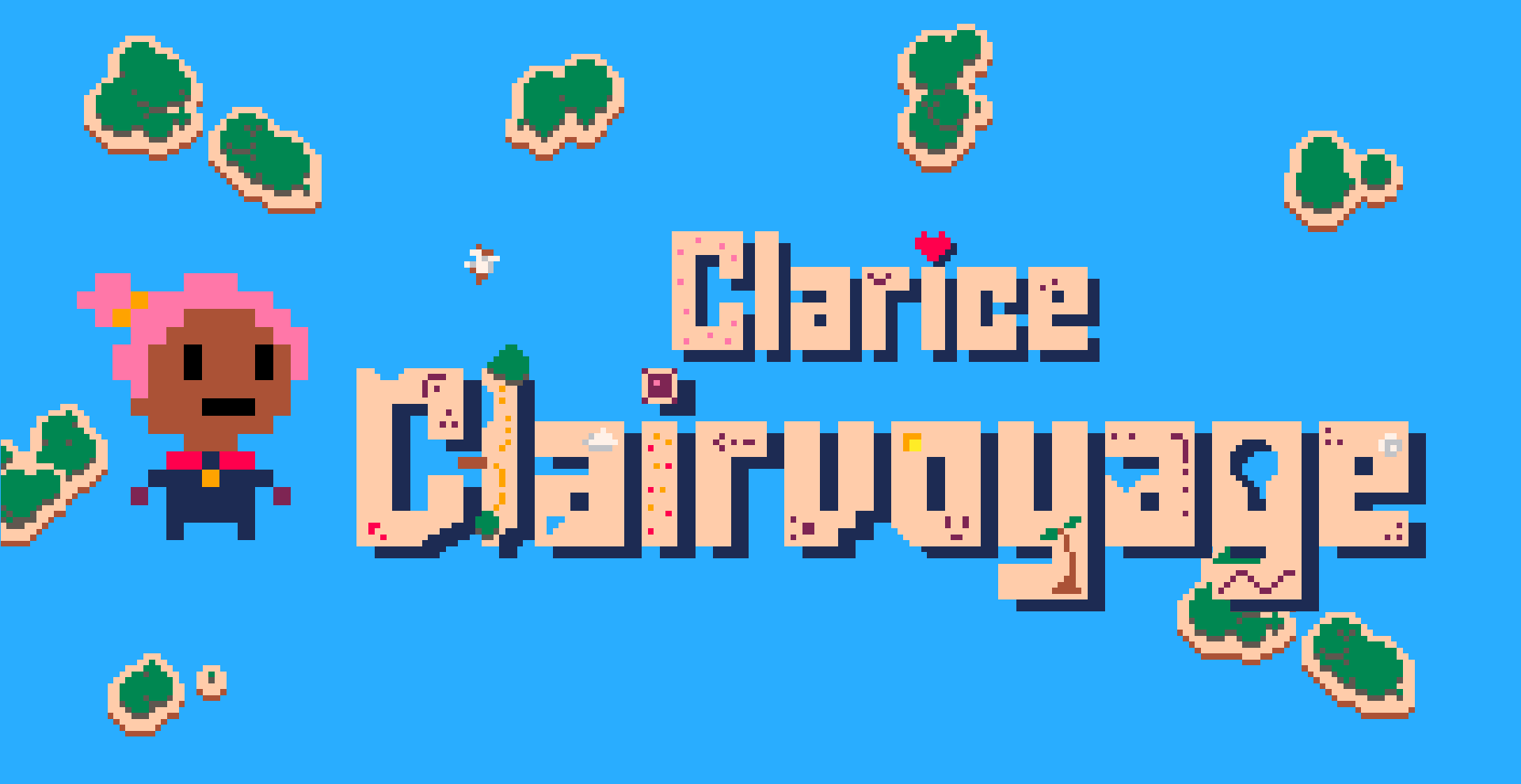 The game is centered around the concept of crafting spells by stacking different pages of a spellbook.

You're outfitted with a few basic pages, but you get access to more as you fight enemies and sail the sea! There are a bunch of different spells that are the result of many types of combination, so experiment away to see if you can get more power of more utility out of every little spell.

Every island there is adventure waiting! Will you get a new spellbook page? Perhaps a talk with a stranger? Who knows!

The game takes place through the character of Clarice Clairvoyage, a young mage in training who is the only one left after a small crisis hits her home island and all of her friends and family are abducted, never to be seen again. In her bravery, Clarice collects what's left of her home and with an old ship she crosses the seas where she might find her family and friends again!

State of the project

I started this project in mid-winter last year. I'm planning on keeping the project relatively small and short, hopefully being done before the end of this year. It's not my full time job to work on this, nor do I have a lot of funds or time to spend on it, so progress will undoubtably be slow. I've already started to get the game out there and I'm trying to let it get known amongst some roguelike enthusiasts or other indie game players.

There's no playable build as of now, but I'll work hard to have at least something playable in the near future. If you're interested in looking at some of the development, I also stream some of the gamedev from time to time, so check out my Twitch to see when you can join me on the next session!

If you have some advice on the project, or if there's something you want to critique, feel free to leave a reply, email me or reach out on Twitter!

Heads up, the game is far from a playable state, I just wanted to kind of start a devloggy kind of thing on this forum!

Please let me know what you think, I'd love to hear your feedback & thoughts!

Alright! So time for the first update on the devlog, excited!

Soo... I stream every two weeks, today was one of those weeks, so you can even watch this devlog in the four hour long stream version where I actually implement these features. In this stream I also go into a little bit of detail on how I did the procgen for the islands. I'll try to do a devlog on how I did those somewhere in the future when I actually fully finish the island's gameplay functionality as well.

Now, to get into the things I've actually done.

Steering the boat with magic
A core part of the game is the magic system that the player uses to fight enemies. I wanted to make more use of this systems besides combat, and one of the first places I wanted to do this, was in the steering of the boat.
The boat has the functionality of transporting the player from each "choose-your-own-adventure" styled island to the next, while occasionally encountering a group of enemies. However, I didn't want the player to just control the boat by tugging on a steering wheel (or whatever you call that on a boat), but instead to use a spell to do it instead!

For now, it uses any form of the "beam/ray" spell that I already implemented, but my plan is to make a "wind direction" spell for this specific task that the player can use.

How it technically works, is that I just take the angle from the spell direction when it's being cast, the mast object then uses this angle to lerp towards (making that satisfying turning animation). After that is done, I make the actual ship in the overworld turn as well, but at a slower rate so that the player has a chance to see it happen as well (plus a boat is very heavy so needs more time to rotate). Technically I can also make the boat representation of in the player's view rotate, however, since the game relies on a grid of spells with close coordination of the player with those locations I've decided (for now) that the boat in the player view doesn't rotate with the actual rotation of the ship.

Docking a ship to an island

So another challenge for today was making this ship actually stop at one of the island if a player desires it.
To do this, I actually found a whole laundry list of bugs in my rendering code for the sea, but I'll skip over that for now. If you feel like watching me struggle with that for about an hour, check out the stream (link somewhere above).

After fixing those bugs, the implementation is somewhat simple:
I start with getting the closest dock, so I just have to run a calculation for it, instead for all.
Then I just take the distance between the ship and the tip of the dock, see if it's within a certain actuating distance and start to slow the ship down.

To leave the dock, I just turn of that threshold, and the ship will start to move further away from the dock edge, slowly speeding up again!

That's it for today, I might do another small update tomorrow or go a little bit more indepth on the island generation soon.

Thank you so much for reading, feel free to leave a comment if I'm a little vague or if I didn't write something clear enough. Also feel free to message me any time, on any platform with questions!