After many months it is finally complete! Toknight is a metroidvania set in the evil Baron Von Schleef's manor, with your task being to defeat him! Claim weapons and items along the way in this open world adventure!

Special thanks to all content creators for helping me to get started on this platform:
@NerdyTeachers
@Krystman
@Gruber
@MBoffin

This is my first full game on Pico-8, so expect some more and hopefully you can see my progress!

The flag is your current checkpoint: 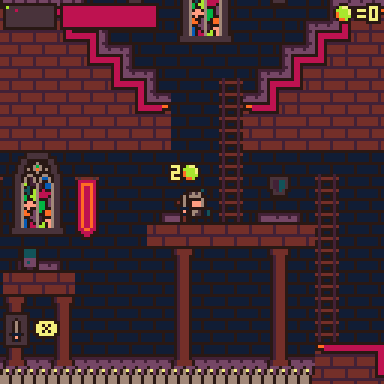 Use coins from enemy drops to purchase health ups: P.S My current username is RaspberryPye but i am currently trying to get it changed to BluishRed, which is what shows up in the game. (I think only @zep can change usernames ???)

This is a visually nice game, and the amount of depth is certainly more than most of the games made in pico-8, but a few issues stood out while playing. To be clear, I think you did a good job. I normally don't comment extensively on games where I'm not sure the creator could've done better or not sure the creator would care (such as with reskins of tutorial code), so all of this should be taken as things you seem like you'd be capable of doing, just judging by the game you've made.

Firstly, the combat doesn't feel skillful. There is a strategy that can be used to get better results (jumping over the enemies periodically to maintain distance), but most of the situations in the game undermine even that. This becomes especially clear during the boss battle, which appears to be mostly luck. If you continue making games, which I would encourage you to do, I recommend putting more thought into how the player can be good at your combat.

Besides that, I think the instant-death spikes feel jarring next to enemies that deal only a sliver of health each hit. It comes across as if the game can't decide between being punishing or not.

Similarly, the overall map design doesn't give a sense of any of the dangerous things being challenges as much as gotchas. To give a few examples, there's a part where a really long tapestry leads downward directly into a platform with spikes on it, which appeared at first to be indicating a path to go to. There's also a platform where the only way to go has the danger of being killed by spikes on a nearby platform from underneath, despite the spikes going upward. This is made worse by the open-world design, as it means nearly every danger can be skipped.

Lastly, there's two points where the presentation somewhat killed the mood during my playthrough: 1. fading to black with no other visual feedback on being killed, and 2. beating the boss but still seeing a sliver of health on the boss's healthbar. Point 1 could be handled either with a simple dead knight sprite or a particle effect, though I can see how that might not be a priority. Point 2 means you may need to consider how your code is handling the fading to make sure that the last frame actually gets calculated and drawn before you start the fade to black.

The pixel art is excellent. Just seeing the stained glass windows made me want to play this game

@kimiyoribaka Thank you very much for that in depth feedback! I agree with all of your points, and a few of them I was planning on fixing before this release, but unfortunately i have hit the token limit and i am not yet skillful enough to be able to optimise it any further from what i have done. Maybe when i have the ability to, i will come back and fix these, thanks

@waynaul Thank you! The pixel art was based on a concept design i saw on itch.io, which i then used to make these. Thanks for the kind words!